Just How Fast Is Your Algorithm?

Methods of analysing the run-time complexity of algorithms.

When designing and using algorithms, a common question to have is which algorithm is more efficient at accomplishing a certain task.

There are multiple strategies for determining efficiency, and in this essay we will look at a couple of approaches.

Perhaps the simplest way of determining the efficiency of an algorithm is by measuring how much time it takes an implementation to run for a given input-size and then compare it to other algorithms.

For example, we can time the execution of this implementation of insertion sort on a input of 500 random elements.

We see that the best average time per loop is 7.57 ms for 100 loops. Averaging is useful as it muddies out

While this is dead-simple to implement, empirical validation has several drawbacks.

Firstly, it can be difficult to determine how fast an algorithm is when the dataset becomes very large; too large to run on a laptop. This is problematic if you're trying to figure out if your algorithm is fast enough to be run on all your data on a super computer.

Just because your algorithm runs quickly on small datasets it doesn't gurantee that it will scale well to large datasets.

Since we would really like a robust, universal way of determining the run-time of an algorithm, and be able to tell if an algorithm is fast enough before actually running it, empirical validation is seldom used in practice.

Instead, we use analytical reasoning where we look at what an algorithm does, and how it scales to large datasets by counting the number of operations performed rather than measuring the time it takes to run directly.

This solves the problem of reproducability with empirical measurements, it also provides a way of determining if an algorithm will be too expensive to run, even on a super computer, before running it.

Another method assessing the efficiency of an algorithm is by analysing it analytically, but that comes at the cost of being more difficult than just measuring the time it takes to run some code.

One most common method of analytically determining the efficiency of an algorithm is by calculating the asymptotic complexity with big-O.

Big-O is concerned with the asymptotic time complexity of an algorithm, or in other words the upper bound for how many steps it will take in comparison to how much data you’re processing. Formally, big-O is defined as:

If the above seems like mathematical garble, you might want to read the piece on formal logic (coming soon) which explains what all those symbols mean, and more importantly why formal logic is useful.

In any case, what the above equation says is that there exists two constants , on the real number line such that is at most as large as for all that’s at least as big as .

Or in simpler terms, if after a certain point, the number of steps it takes the algorithm to run is proportional to another function , then big-O of that algorithm can be described as .

As an example, let’s suppose you have an algorithm that runs in time, then big-O of that algorithm is because is greater than or equal to for all that’s at least zero.

Mathematically, this can be written as:

Or more generally as:

Below are some graphs of common running time complexities. 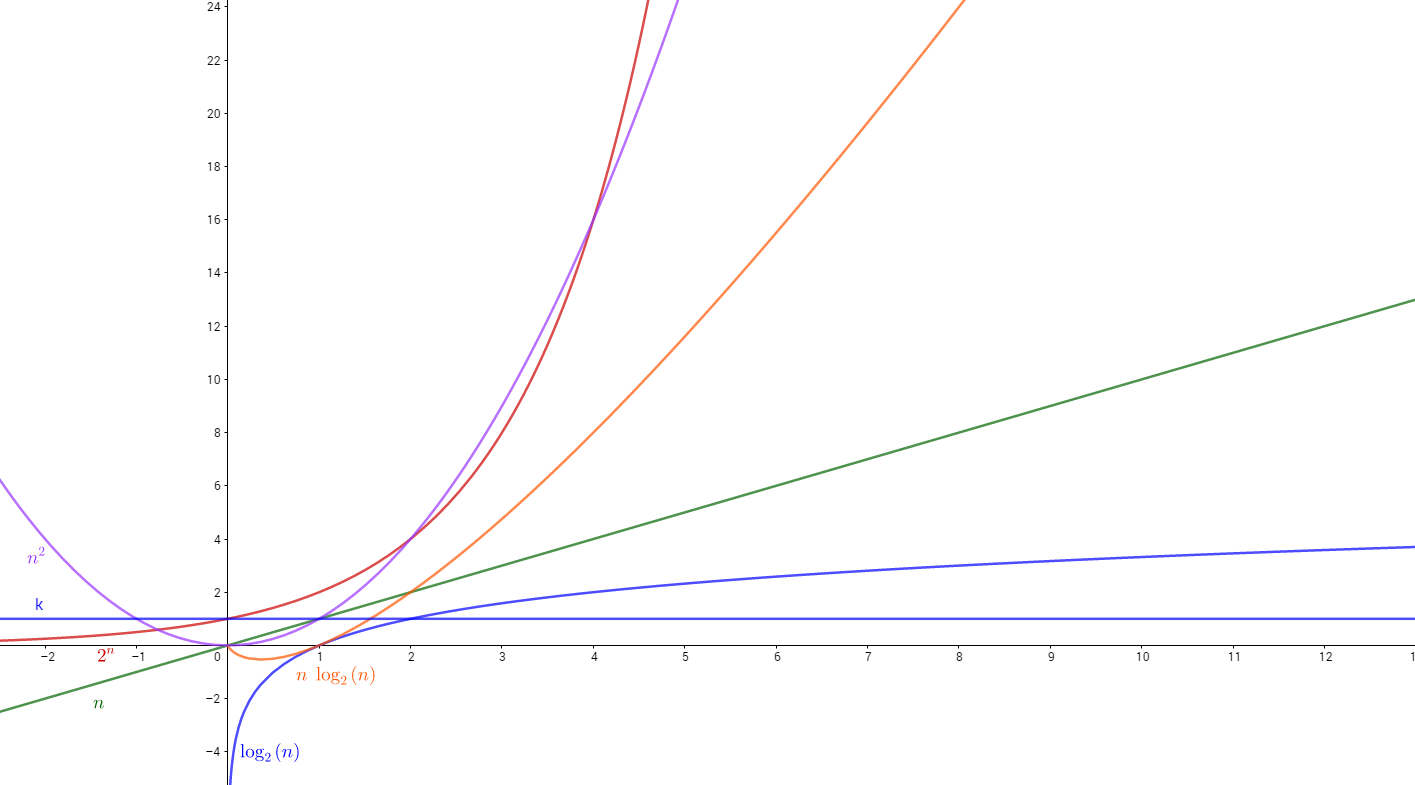 An efficient algorithm is one that has a low running time for large .

Because big-O is unconcerned by small values, it’s ideal to analytically determine the efficiency of algorithms. With that said, there are other methods of analysing efficiency.

In practice, you generally want to avoid algorithms that run or slower as these algorithms are not practical for large datasets.

To see Big-O in action, let's try to compute the Big-O asymptotic runtime of a naive matrix multiplication algorithm.

Assume two matrices , and where which is necessary for to be defined. We know that:

Furthermore, due to the way matrix multiplication is defined, every element , where denotes the row index, and the column index, can be found by:

Since , we can simplify the above by setting , as follows:

All the elements in the matrix can now be found by:

Here, we see that the we have to compute for each element of the matrix, so we get:

When analyzing matrices, it's a common practice to assume there are the same number of rows and columns. Using this assumption here, we find that the running time for can be expressed as:

Big-O is not the only way of analytically determining the complexity of an algorithm.

Another method is by using the tilde () notation.[1] Tilde notation, much like big-O notation, is used to come up with a simple, and succinct expression for the run-time of an algorithm.

Using tilde notation, represents any quantity that approaches the value of 1 when divided by as goes towards infinity, or . Mathematically, we can write:

For example, suppose we have a function that takes steps to complete. Then we can write:

These are just two asymptotic notation schemes. There exists many more. An overview can be found on OEIS's wiki.

We have discussed different methods of determining the efficiency of an algorithm, and have found why analytical approaches such as the popular big-O notation is preferable to empirical measurements.

Furthermore, we have looked at alternatives to big-O specifically tilde notation which preserves the coefficient of the leading exponent.

How Bitcoin Works
We build a blockchain pretty much.
read essay

The Future of Deep Learning

In a presentation given by Andrew NG about this very topic, he talked about t...